Emotion and Constellation from the Viewpoint of Buddhism

I would like to refer to the web interrelated networks within both the brain (the nervous system) and the embodied emotions, and the constellation as their phenomena.

Just how the neurotransmitters affect the mind itself is unknown. But everything indicates that they affect the rhythms of the brain and the rest of the body. Molecules of dopamine (DA) and other neurotransmitters (S, NA, Glu, GABA) in the brain do only one thing: They excite or inhibit nerve cells, and thus they control the “firing pattern” of nervous tissue. There are thousands of different of such firings within the brain and elsewhere (E.M. Podvoll, 1990). It is the interrelated nervous web networks which pulse the neural pathways and operate on our neural codes and thereby work on our emotions.

A specific emotion or the combined emotions come(s) out from the above interrelated nervous networks. The emotions are also interrelated in the following “Map of Emotion” (Sugitani/Nakai, 1998/2001). 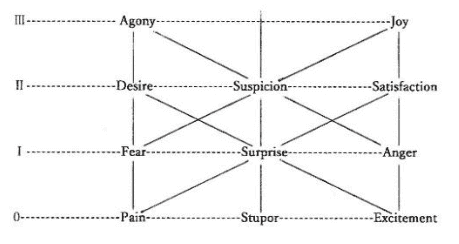 To understand the interrelated network, I would like to amplify it by a diagram of yüan ch’i (T. Izutsu, Eranos/1980) as follows: ] 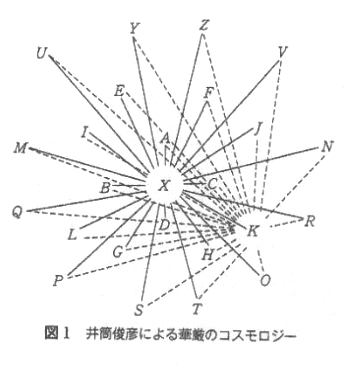 Only a diagram of this nature, consisting of an infinite number of multitudinous and multidimensional systems of ontological relations would do justice to the true structure of things as they are seen from the viewpoint of 縁起 yüan ch’i. And only such a diagram would be accepted by 華厳哲学 the Hua Yen philosophers as a correct visualization of the central idea of their ontology, namely, that the universe in its entirety is an infinitely vast multilayer structure of manifoldly interrelated things.

I think this is the principle (concept) to unite the brain nervous networks and the embodied emotions, and to understand the constellation (phenomena of Collective Unconscious) as the network phenomena, from the viewpoint of Buddhism.